What It’s Good For: Accessing your smartphone while on the go, from your wrist.

Who It’s Good For: Smartphone owners who love to use apps for running, swimming, biking and multitasking.

Limitations: It’s still in production and the first round of orders is closing soon. 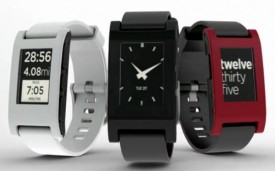 Bottom Line: Pebble is the first smart watch to seamlessly work with the iPhone and Android, and there’s a reason why users are clamoring to order a sleek, smart-looking Pebble.

Pulling your phone out of your pocket to see who’s calling or to read text messages is so 2011.

The Pebble smart watch lets you check your messages, see who’s calling and even control the tunes your smartphone is playing -– all from your wrist.

Developed by the same company that produced the inPulse smart watch for BlackBerry, Pebble connects via Bluetooth to either your iPhone or Android smartphone to work as a mini-smartphone of sorts, allowing you to perform many of the same functions as you do with your phone.

Pebble has an e-ink display similar to what you might find on a Kindle or Nook, so you can see the watch face in direct sunlight. The display also conserves battery better than a traditional LED screen, which means that the watch can keep a charge for close to 7 days. The Pebble is also scratch-resistant and waterproof; if your sunny travels take you poolside, you don’t have to worry about damaging the watch while you’re sipping Mai Tais.

Pebble comes in three different colors: arctic white, jet black and cherry red. A fourth, user-voted color will be decided as soon as the initial orders close on May 18. With several weeks left to go, the company has already gotten more than $6 million in funding from future Pebble owners.

Pebble isn’t just a watch — it also provides a host of utilities that makes it useful for those leading an active lifestyle. For instance, if you’re a cyclist, then Pebble can work as a bike computer: The watch uses the GPS capabilities in your phone to keep up with and display details about how far you’ve traveled on your ride and how fast you’re going. The same functionality can also come into play if you’re a runner and want to monitor your pace or distance.

If you want to listen to tunes while you run (or if you don’t want to pull out your phone to change songs while on your commute), Pebble can control most music apps. The watch supports iTunes and Google Music, as well as popular third-party music apps such as Pandora and Spotify.

While Pebble connects to your Android or iPhone device, it doesn’t run the same apps as your favorite smartphone. The watch has its own app store with a bevy of different services that can both send and receive data from the Internet. The company is launching an open SDK so anyone can build apps to run on the phone as soon as it launches.